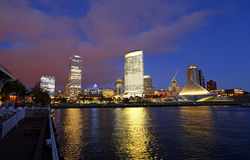 When they meet this July in Milwaukee, Democrats hope they will be anointing the 46th U.S. president. Their nominee won’t be picked in any iconic “smoke-filled room,” but that’s only a certainty because convention halls are now non-smoking venues. But there may be old-fashioned horse-trading.

The Holy Grail for modern American political reporters has long been the “brokered convention.” Theoretically possible, it just never materializes. Yes, Edward “The Dream Will Never Die” Kennedy made it interesting at the Democrats’ 1980 New York convention. And Ronald Reagan almost pulled it off in Kansas City four years earlier. But the boring facts of life are that the two major political parties have institutionalized rules designed to prevent stampeded conventions.

Those rules have been successful, at least until now. This year could be different: In 2020, the political planets and moons in the Democrats’ firmament are in an ominous alignment.

For starters, although Democrats long ago eliminated winner-take-all primaries, in this cycle they’ve also neutered the so-called superdelegates. These are elected officeholders and party professionals who theoretically possess the institutional memory and common sense to know what kind of candidate succeeds in general elections. In Milwaukee, superdelegates can no longer vote on the first ballot.

This change comes in a year featuring the absence of an obvious heir apparent around whom the party establishment can coalesce. Without such a favorite among donors and the activist party base, support has been diffused among four top-tier candidates: Joe Biden, Bernie Sanders, Elizabeth Warren, and Pete Buttigieg. In addition, two billionaires are spending their kids’ trust funds with self-funded candidacies. One of them is going nowhere. The other, Michael Bloomberg, may find some traction. So that’s five possible candidates who could arrive in Milwaukee with pledged delegates.

The upshot is that it’s possible, as RCP contributor Bill Whalen notes, that no Democrat will head into the convention with the requisite delegate count for a first-ballot nomination. To political junkies who know their history, this brings to mind the Republicans’ 1880 Chicago convention.

That year, when primary elections were unknown — and smoking was allowed almost everywhere — two perceived front-runners for the GOP presidential nomination came to the Windy City with high hopes. The first was Sen. James G. Blaine, a former House speaker known by his admirers as “the Magnetic Man from Maine.” The second was former President Ulysses Grant, seeking an unprecedented third term in the White House.

Neither Grant’s forces nor Blaine’s were certain of prevailing. And with good reason: An influential member of the Ohio delegation had plans of his own. His name was John Sherman, a man with a long record of distinction in the House, the Senate, and the Cabinet – with ambitions to match. Although Grant was also from Ohio, as was the current president, Rutherford B. Hayes, as the delegates gathered in Chicago, the most popular Buckeye State Republican was neither Grant nor Sherman – or even Hayes. It was a newly elected (though not yet seated) senator, James A. Garfield. Knowing this, the cagy Sherman maneuvered the eloquent Garfield into delivering his nominating speech. This seemed wise, right up until the moment Garfield began speaking.

Grant’s forces had whipped his loyalists in the packed hall into a frenzy, essentially by invoking “the candidate from Appomattox!” When it was his turn to make the case for Sherman, Garfield eschewed emotion, instead appealing to the delegates’ reason and aspirations for the future, one he described as a united country, North and South.

This new Republican Party, Garfield said, should send out a “clear and unwavering” message to the defeated South, consisting of this lesson: “This is our only revenge – that you join us in lifting into the serene firmament of the Constitution … the immortal principles of truth and justice: that all men, white or black, shall be free, and shall stand equal before the law.”

“And now, gentlemen of the convention,” Garfield said as he placed Sherman’s name in nomination, “what do we want?”

From the floor came a shout, a most unwelcome one to the speaker and his patron: “We want Garfield!”

When Garfield finished, the place went wild. His name was not in nomination, however, so when balloting began the following morning, Grant had 304 votes from the delegates, Blaine attracted 284, and Sherman had 93 — all well short of the 379 needed. Game on.

On the second day, when Wisconsin’s delegation split its 18 votes between Grant and … Garfield, the latter jumped to his feet to raise a point of order in objection. But the logjam was breaking. The convention became a stampede, and Garfield’s nomination was solidified when the Maine delegation abandoned its favorite son for James A. Garfield.

Could it happen today? And how might such a scene play out in Milwaukee. Here’s one scenario:

The first ballot has been taken. Biden leads the pack, followed by Sanders, Bloomberg, Warren, and Buttigieg. Their campaigns start trying to cut deals. Two of the male candidates announce that Amy Klobuchar would be their running mate. Liz Warren says that she’ll run with Cory Booker. Speeches are made, tempers run hot, and fistfights break out on the floor (although it turns out it’s only between producers from Fox News and CNN). Bernie has a heart attack — and recovers the same day. Network and cable ratings go through the roof. On the third day, word spreads that Nancy Pelosi has an important announcement to make. The rumor mill goes wild.

“I want to thank all the delegates for keeping their cool,” the House speaker tells the hushed hall. “And I want to introduce someone who I believe can help with our deliberations.”

With that, out strides a statuesque and striking figure known to every delegate, every member of the media, and every voter riveted to their television screens. There is a wave of enthusiastic applause before even a word has been said. Then she begins.

“Thank you for letting me speak tonight,” Michelle Robinson Obama says softly. “I last spoke to Democratic delegates four years ago in Philadelphia and you were very nice to me. Yet, not all of you heeded what I said. So I’m here again, and this time I want to make just two points and then I’ll let you resume your deliberations.”

“The first point,” she continues, “is that when I said, ‘When they go low, we go high,’ I wasn’t just trying to be clever. I was describing a core value that I think should be a defining trait in the Democratic Party. Instead, too many of us – too many of you in this hall tonight, and your candidates, consultants, and cronies in the media – have done the opposite. Our new mantra seems to be ‘When Donald Trump goes low, we go lower.’ This is not who we want to be. It’s not who the country wants us to be. We can be better than that. We must be better.”

The delegates listen in respectful silence, just as they did for James Garfield 140 years ago. The former first lady continues: “Everyone in this hall believes that Americans deserve a better, kinder, smarter and more honest president than the current incumbent. But we don’t make our case to the country by emulating him the way we have been doing — with name-calling, and vulgarity, and saying things that we know are not true. When he goes low…”

Then a shout from the audience breaks in: “We go high!”

Michelle Obama repeats herself, and it turns into a thundering call-and-response. She then raises her hands for silence.

“I have one other point to make,” she says. “For the last 18 months, our party has been having an intramural debate on health care, tax policy, guaranteed income. But what we’re really doing is arguing over whether we believe in free-market capitalism. I’ll put it to you this way: We have been debating whether the Democratic Party is a socialist party or a liberal party.

“I can’t answer for all of you,” Michelle Obama continues. “But I can answer for myself and for Barack, and for the millions of swing-state voters that supported him and sent us to the White House twice: The Democratic Party is a liberal party. And the question for the convention is ‘What do we want?’”

With that, another voice shouts from the hall. “We want Michelle!”

The cry is taken up. It becomes a chant. It goes on for 15 minutes and is only interrupted when the leader of the Vermont delegation asks for a point of order, and is recognized. Still wearing her “Feel the Bern” button, she stuns the audience by switching all of the state’s Sanders delegates to “Michelle Robinson Obama of Illinois.”

The chair rules the motion out of order on the grounds that her name is not in nomination. A thousand hands shoot in the air followed by a thousand shouts of “I second the motion!” The stampede is on.

Could it happen? Naysayers will point out that Michelle Obama is believed to abhor politics and couldn’t wait to leave Washington. To that, I say that she couldn’t possibly want the nomination any less than James A. Garfield. He was Michelle Obama’s kind of Republican, by the way: a longtime abolitionist and Union general who championed public education and political civility.

Garfield hadn’t even wanted to attend the convention, writing in his diary that he agreed to go “with much reluctance” because he so disliked the “antagonisms and controversies which are likely to blaze out in the convention.”

Carl M. Cannon is the Washington bureau chief for RealClearPolitics. Reach him on Twitter @CarlCannon.