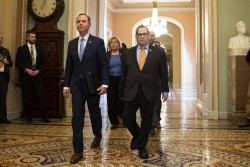 Speaker Nancy Pelosi last fall made it clear that Democrats would not pump the brakes on their impeachment inquiry to wait for the results of a court battle to compel Trump administration officials to testify.

“We cannot be at the mercy of the courts,” she said in late November.

She may not have a choice.

Fast forward two months into the Senate impeachment trial, which formally kicked off this week, and the House’s decision to move forward without those witnesses could become one of the most high-stakes games of “hurry up and wait” in modern political history.

Democrats may have little choice but to spend weeks or even months cooling their impeachment heels waiting for the courts to weigh in and determine if the White House’s expected executive privilege claims can block testimony from former national security adviser John Bolton,  White House acting chief of staff Mick Mulvaney, Office of Management and Budget official Michael Duffey, and other administration officials Dems want to call for testimony.

Trump last year said he had no problem with Mulvaney, Secretary of State Mike Pompeo, Energy Secretary Rick Perry, and “many other people” testifying in a Senate trial, as long as former Vice President Joe Biden and his son Hunter also are called.

He has since reversed that position, suggesting this month he would instead claim executive privilege to try to block Bolton and others from testifying.

“There are things that you can’t do from the standpoint of executive privilege. You have to maintain that,” Trump said. “You can’t have him explaining all of your statements about national security concerning Russia, China, and North Korea — everything — we just can’t do that.”

Alan Dershowitz, who recently joined Trump’s impeachment defense team, earlier this week argued that any Democratic attempt to compel Bolton to testify would get tied up in a court battle because White House lawyers would exert the president’s constitutionally protected right to confer privately with top aides.

“If they do call Bolton, then we have constitutional issues, because Bolton will want to testify, the president will invoke executive privilege, it will probably have to go to court and it will result in just the kind of delays in a trial that the Democrats did not [want],” he told CNN.

Sen. John Cornyn of Texas suggested such a court battle could force the Senate to adjourn the impeachment trial for “weeks, if not months” and may have to be decided by the Supreme Court.

The issue of Bolton testifying “raises all sorts of issues,” Cornyn told NBC News. “We’re not a court of law, and if there is a claim of executive privilege or some national security privilege, one possibility would be that we’d need to adjourn the Senate trial for weeks if not months to allow that to be litigated through the district court, court of appeals, maybe even the Supreme Court.”

While there’s virtually no chance that 67 Senate Republicans would join all the Democrats to vote to impeach Trump, time-consuming court delays could draw out the trial even further into the 2020 presidential election with unpredictable results at the polls for both parties.

“That’s the risk the House Democrats took by rushing to impeach the president without the necessary evidence,” said Mike Davis, a former GOP Senate and White House aide who played a key role in the confirmation of Supreme Court Justice Brett Kavanaugh. “It is no surprise that the president’s confidential discussions with his closest advisers — especially his national security adviser — are protected from disclosure.”

“[It’s a] historic and bipartisan precedent that presidents can have candid discussions with their closest advisers without fear that Congress will interfere with the presidents’ duty to run our executive branch,” he added.

Even if the courts weigh in and allow Bolton to testify, one option under consideration is to have him testify in a classified setting to provide more protections for communications Bolton and the president had on sensitive national security matters before the former national security adviser exited the White House last year on bad terms.

A senior administration official on Tuesday was keeping the White House defense team’s strategy close to the vest while warning that they have a plan for all scenarios.

“We aren’t going to get ahead of anything that may come up,” the official told RCP. “Our case is incredibly strong and we don’t think additional witnesses will be needed. But we are fully prepared for any eventuality.”

Such a time-consuming court fight over witnesses could force the Senate impeachment trial to go on a hiatus and officially adjourn. A delay might be enough to convince one or more of the key centrist GOP senators — Susan Collins, Lisa Murkowski, and Mitt Romney — that pushing for testimony from Bolton or other current and former administration officials really isn’t worth it.

Some Republicans are already citing such a delay as a reason to forego hearing from such witnesses.

“I don’t want to see the trial stop for a week or two while we wait for a court to decide if somebody can testify,” Sen. Kevin Cramer of North Dakota told NBC News.

Faced with such a possibility, Collins on Tuesday continued to say she was leaning toward backing Democrats’ push for calling witnesses, citing her support for the inclusion of witnesses during President Bill Clinton’s Senate impeachment trial 21 years ago. She made the point of supporting Senate Majority Leader Mitch McConnell’s organizing resolution, which provides for a vote on whether to subpoena witnesses and documents at the conclusion of questions by senators.

“As I said last week, while I need to hear the case argued and the questions answered, I anticipate that I would conclude that having additional information would be helpful,” Collins, who is in a tough re-election fight in the blue state of Maine, said in a statement. “It is likely that I would support a motion to subpoena witnesses at that point in the trial just as I did in 1999.”

Collins did not directly respond to RCP’s question on whether she was concerned that calling witnesses would force the Senate to adjourn the impeachment trial for weeks or months. Spokespersons for Murkowski and Romney also did not respond to the same question.

Romney has said it’s important to hear from Bolton “and perhaps other witnesses” for the defense as well as the prosecution. He agrees with Collins and the GOP majority that the time to consider witnesses is after the impeachment’s opening arguments, which extend into next week. Murkowski supported McConnell’s organizing resolution but left herself open to calling witnesses later in the trial.

‘No way out’: Demographics drive GOP nosedive on West Coast

Republicans slam Pelosi over impeachment reversal after floor vote: ‘What has...