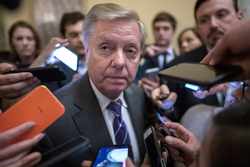 Attorney General William Barr recently took the unprecedented step of requiring any future investigation of a presidential campaign to get approval from him and the director of the FBI. But recent statements from the intelligence agencies suggest that political spying — on members of Congress as well as presidential candidates — may be more widespread than Barr himself realizes.

Barr’s laudable decision was in part a reaction to the report by Inspector General Michael E. Horowitz, which detailed the lack of adequate institutional oversight of electronic surveillance within the FBI, even about an investigation touching on a presidential campaign. Some civil libertarians also worry that the government may be playing fast and loose with “unmasking” – the practice of revealing within the intel community the identity of an American citizen whose conversations are incidentally caught up in the National Security Agency’s trawler of international calls. Sen. Lindsey Graham, then chairman of the Senate Intelligence Committee, voiced concern that he might have been a victim of unmasking.

It would be easy to write off these stories as overhyped (if you dislike Trump), or proof that the intelligence community is out to get Trump (if you like Trump). But the threat of political surveillance should not be a partisan matter. After all, political surveillance hit a high point with the FBI and CIA in the (Republican) Nixon era, when both agencies were deployed to conduct domestic, political spying.

To determine whether such spying has recently occurred, our nonpartisan civil liberties group filed Freedom of Information Act (FOIA) requests with the prominent agencies in Washington’s intelligence community. We first asked about surveillance of members of the House and Senate Intelligence Committees in both parties.

The Office of the Director National Intelligence got back to us in just four business days. As often happens with FOIA requests, we received a boilerplate non-answer called a “Glomar response.” The agency said it “can neither confirm nor deny the existence or non-existence of records responsive to of [sic] your request. The fact of the existence or non-existence of the requested records . . . could reveal intelligence sources and methods information that is protected from disclosure.”

When we asked the same question about presidential campaigns going back to 1978, we got the same answer. Another FOIA request, about the possible targeting of members of the House and Senate Judiciary Committees, produced a Glomar response within two business days.

This method of institutional stonewalling originated from one of America’s most ambitious intelligence projects. In 1968, naval observers in the Pacific noticed a flurry of Soviet naval activity that could only have been a search for a missing submarine. The U.S. Navy located the wreck of the Soviet submarine K-129, capable of carrying nuclear missiles, 16,000 feet below the surface. Enlisting billionaire industrialist Howard Hughes to create an elaborate cover story, the CIA commissioned the state-of-the-art Hughes Glomar Explorer to recover the wreck. The project quickly generated rumors. Unwilling to acknowledge its project to the media, the CIA issued the first “Glomar” response.

In the intervening years, this non-answer meant to conceal a monumental intelligence project about a sunken Russian sub has become a standard response to inquiries about matters of broad public interest. One federal judge in 2004 rejected a request by the Department of Defense and CIA to conceal documents and photos pertaining to the Abu Ghraib torture scandal. But the record of lower courts has mostly been to expand the reach of the Glomar blanket, and the agencies continue to hide under it whenever possible.

But where possible political spying is concerned, even a Glomar response is revealing: If the agency is not engaged in political spying, no “sources and methods” could possibly be exposed from a straightforward answer to the question – are you now or have you been spying on presidential candidates or members of Congress?  The agencies’ Glomar responses thus imply that at least some “sources and methods” for spying on presidential candidates and members of Congress have, at some point, been developed and deployed.

Such political surveillance, if it is still happening, would be a greater threat than anything Russia might have done. It is one thing for Moscow to use social media to try to meddle in our politics and culture. Far worse would be for our own intelligence agencies to think and act like Russian intelligence agencies.

Moreover, surveilling legislators would give the executive branch a whip to hold over Congress. Similarly, spying on presidential candidates and campaigns would create a danger of the kind of blackmail in which FBI director J. Edgar Hoover is believed to have engaged.

And if our nation’s leaders are not safe from surveillance by our own government, do you really think you are?

Biden Is What Happens When Democrats Lack Imagination