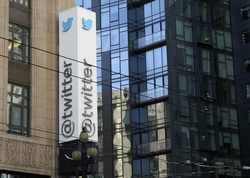 Last week, NBC reported on a leaked internal demonstration app from Twitter showcasing one of the company’s ideas for fact-checking elected officials. Tweets by public figures that are contested by fact-checkers, journalists and even ordinary users would be visually flagged with large bright orange warning boxes proclaiming that the tweet is “harmfully misleading” and linking to statements countering it. While the company emphasized that the demo app was merely one of many internal ideas under consideration and there are no immediate plans to roll it out, a closer look reminds us just how much power Silicon Valley increasingly wields over the future of “truth.”

Twitter once billed itself as “the free speech wing of the free speech party” and proudly embraced the vision of a democratic free-for-all in which anyone could say anything. When Islamic State terrorists embraced the platform, the company famously refused a congressional request in 2015 to ban them outright, offering that it was expanding its moderation while preserving “the ability of users to share freely their views — including views that many people may disagree with or find abhorrent.” Two years later the company’s head of global public policy communications reiterated the importance of “empowering all people to freely express themselves, even when that can lead to challenging conversations.”

Over time, however, Twitter’s absolute commitment to free speech has given way to business realities. From its original rules proudly proclaiming that “we … will not censor user content except in limited circumstances” to its 2016 revision that acknowledged “there are some limitations on the type of content and behavior that we allow,” the company has gradually rolled back its founding vision of freely flowing ideas.

In its place, the company now openly talks about “conversational health” and preventing “intolerant discourse.”

Twitter is increasingly used by elected officials to hear from their constituents. The moderation decisions that Twitter makes each day in removing content and users it disagrees with therefore mean the social media giant increasingly controls the kinds of views our nation’s citizens are permitted to communicate to their representatives.

Asked last year to comment on this issue, the company responded with a series of pointers to its counter-misinformation efforts and to deny that it performed “shadow banning” of some views. In short, the company saw its actions to silence unpopular voices not as a threat to democracy but rather as an issue of addressing misinformation. In fact, the company’s guiding principle today is that “intolerant discourse … is inherently threatening to democracy” rather than the product of a divergent democratic society.

The prototype uncovered by NBC reflects the company’s continued transformation from an unfettered public square to a carefully curated private club in which only ideas it agrees with are permitted.

In Twitter’s demo app, fact checkers, journalists and ordinary citizens could rate tweets by public figures as “harmfully misleading.” Any Twitter user could earn “points” and a “community badge” if he or she “act like a good neighbor” to “provide critical context to help people understand information they see.” The majority voice wins, with users who rate posts differently having less sway in rating content.

At the heart of Twitter’s prototype is the idea that there is a single “right” answer to every debate and that the majority must, in Twitter’s words, “protect each other from those who would drive us apart.”

In a statement, the company reiterated the demo app was merely one of many ideas it was evaluating and that it had no immediate plans to roll it out: “We're exploring a number of ways to address misinformation and provide more context for Tweets on Twitter. This is a design mockup for one option that would involve community feedback. Misinformation is a critical issue and we will be testing many different ways to address it.”

And asked why Twitter is building these tools in secrecy, and why it doesn’t publish all of its prototypes and ideas to permit public debate over their potential impacts, the company emphasized that all businesses have the right to develop policies and tools while shielded from public view. Yet, the reality is that few companies have the influence over democracy itself that Twitter does. What’s more, democracies debate in public; they don’t promulgate rules that were written behind closed doors.

In the end, Twitter’s misinformation prototype reminds us just how much the future of democracy, free speech and indeed “truth” itself is being decided, in secrecy, by a small number of Silicon Valley companies.

RealClear Media Fellow Kalev Leetaru is a senior fellow at the George Washington University Center for Cyber & Homeland Security. His past roles include fellow in residence at Georgetown University’s Edmund A. Walsh School of Foreign Service and member of the World Economic Forum’s Global Agenda Council on the Future of Government.