Former Russia special counsel Robert Mueller pushed back against President Donald Trump on Saturday, defending the prosecution of Roger Stone and the larger investigation into Russia interference in the 2016 election, saying that the flamboyant political operative was “prosecuted and convicted because he committed federal crimes.”

“He remains a convicted felon, and rightly so,” Mueller said in a column published Saturday in The Washington Post.

Mueller's remarks, prompted by Trump's commutation of Stone's 40-month prison sentence Friday, are the first since he testified before a House committee nearly a year ago after his team brought charges against at least a half-dozen former Trump aides during his campaign and after he took office, 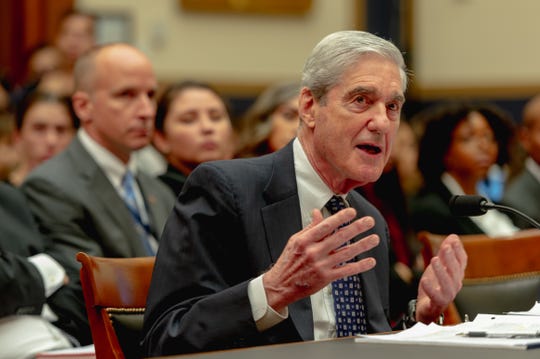 Stone was the last person charged by the Mueller team during the nearly two-year Russia investigation.

“Russia’s actions were a threat to America’s democracy,” Mueller wrote. “It was critical that they be investigated and understood.”

Mueller said the FBI had evidence that the Russians had signaled to a Trump campaign adviser that they could assist the campaign through the anonymous release of information damaging to the Democratic candidate.

Mueller offered a detailed accounting of investigators' focus on Stone by federal prosecutors and Congress.

“He lied by denying he had communicated with the Trump campaign about the timing of WikiLeaks’ releases,” Mueller wrote. “He in fact updated senior campaign officials repeatedly about WikiLeaks. And he tampered with a witness, imploring him to stonewall Congress.

“The jury ultimately convicted Stone of obstruction of a congressional investigation, five counts of making false statements to Congress and tampering with a witness,” Mueller wrote. “Because his sentence has been commuted, he will not go to prison. But his conviction stands.”

Mueller said the “essential question” of whether those efforts involved the Trump campaign required investigation.

“When a subject lies to investigators, it strikes at the core of the government’s efforts to find the truth and hold wrongdoers accountable,” Mueller said. “It may ultimately impede those efforts.

“We made every decision in Stone’s case, as in all our cases, based solely on the facts and the law and in accordance with the rule of law. The women and men who conducted these investigations and prosecutions acted with the highest integrity. Claims to the contrary are false,” he said.

“Unprecedented, historic corruption: an American president commutes the sentence of a person convicted by a jury of lying to shield that very president,” Romney wrote on Twitter Saturday morning.

Trump granted Stone clemency days before he was to report to a Georgia prison to begin serving his sentence.

Trump has pardoned allies before, but Stone is the first individual directly connected to Trump's campaign to receive presidential clemency.

A statement issued by the White House on Friday called Stone “a victim of the Russia Hoax that the Left and its allies in the media perpetuated for years in an attempt to undermine the Trump Presidency,” claiming that prosecutors made “process-based charges” in lieu of “finding evidence of collusion with Russia.”

This is not the first time that Romney has publicly condemned Trump. When he voted to convict Trump on an impeachment charge in February, he was the only Republican senator to do so, and became the first senator ever to vote against his own party's president in an impeachment trial.